One of the key differences between horoscopic astrology and visual astrology is that when we are looking at the sky, we notice that planets will disappear from view and then reappear as they change their relationship to the sun. Thus if you are looking at a horoscope for mid-December, 2006, you will notice a Jupiter/Mars conjunction in Sagittarius but if you have actually been watching the sky, you will notice something far more important unfolding. Jupiter has been lost from view, and indeed as discussed in last month’s newsletter, the king (Saturn) has been standing alone in the sky. But in mid- December Jupiter will reappear in the early morning light and be seen rising amongst the stars of the Scorpion.

To the Babylonians, the return of Jupiter was a time of rejoicing and the new born god (planet) was named Sulpa’e to distinguish it from when Jupiter was rising at any other time of the night when it was called Sagmegar. Jupiter’s other name when it reached culmination was Neheru:

When the stars of Enlil have finished,
The great star shining faintly,
That halves the sky and stays there, is Nibiru [Jupiter and also written Neheru] [1]

This passage refers to the time when the stars in the northern sky have faded in the dawn light but the great star Jupiter can still be seen shining faintly while standing in the middle of the sky, on the meridian or the MC (van der Waerden, 1949). We will explore Jupiter as Neheru in later newsletters as this is something that horoscopic astrology totally ignores. For now we are going to explore Jupiter as Sulpa’e.

To be honest, it is difficult to discover what the nuances of these three different names of Sulpa’e, Sagmegar and Neheru imply about the meaning of Jupiter in its different visible stages but generally Jupiter as Sulpa’e (the visual return of Jupiter to the sky) was considered a blessing.

But this Sulpa’e who comes to us in December, 2006, is different. As we have explored in other newsletters, Jupiter is symbolic of a powerful crown prince or military general who steps onto the world stage. Now all this year Jupiter has been supportive of the king’s activities but now, in his new guise as Sulpa’e, he rises with Nergal (Mars) and they both re-appear amongst the stars of the great Scorpion. Mars and Jupiter together are seen as a difficult conjunction, as Nabu-iqusa, a sixth century Babylonian astrology/priest, points out :

If Jupiter stands in front of Mars: there will be barley; animals or a large army will fall. [2]

If Nergal stands in Scorpius: a strong
enemy will carry off the land; Enlil [the king in the north] will give his weapons to the enemy; few enemy troops
will defeat my numerous troops. [3]

So in reading the sky narrative, in mid-December we will have Sulpa’e stepping onto the world stage (Jupiter becomes visible in the pre-dawn light) with anger in his heart and war on his mind (with Mars in the stars of the Scorpion), at the time when the king (Saturn) stands alone (which many readers have suggested is reflected in President Bush’s isolation due to the loss of both houses of parliament in the US elections last month).

Jupiter as Sulpa’e amongst the stars of Scorpio will occur, of course, every twelve years, but the addition of Mars makes this event far less frequent. Indeed in searching back using both Jigsaw and Starlight over the last thousand years, I have found only three other such times.

Sulpa’e in 1342
In December, 1342, Jupiter re-appeared in the early morning light with Mars, and the king (Saturn) was not visible. At this time Estonia has been conquered by crusaders from Denmark and Germany and the new rulers imposed such heavy taxes and duties that gradually parts of the indigenous population were reduced to serfs. As Sulpa’e linked with Mars in the stars of the Scorpion, the population went into revolt against the Danish Catholics. This revolt eventually lead to what became known as “St George’s Night” in April 1343. This uprising is arguably the single most notable uprising by Estonian-speakers against the local German-speaking upper class who dominated Estonia from 13th to early 20th century.

Sulpa’e in 1579
The next occurrence of this combination was in December, 1579.  This was similar to 1342, as Sulpa’e appeared with Nergal (Mars) and there was no visible Saturn in the sky. At this time the Portuguese king, the old Cardinal-King Henry, died with no heir. His death resulted in a power vacuum and a long struggle which was eventually won by the Spanish who claimed the throne of Portugal at the Battle of Alcântara bringing Portugal under its rulership.

Sulpa’e in 1769
Lastly in December, 1769, another country suffered from unfair taxation. At this time Saturn (the king) was as it is now, visible in the sky, so this is the sky narrative of a rebellion or clash with an established power.

By late 1769 tension was rising in the new British colony of New York. Bowing to pressure from Britain, the New York Assembly had voted to provide £2000 to provide food and shelter to British troops stationed there. The people were infuriated, believing the Assembly had betrayed the inhabitants of the new colony. Indeed this £2000 acted as a catalysis and by January, 1770, violence had broken out between the British soldiers garrisoned in New York and the local patriots. This is considered by many to be the first steps, or beginning, of the American War of Independence some five years later.

Sulpa’e in 2006
Once again Sulpa’e is linked with Nergal in the stars of Scorpio. A king in isolation will be challenged. This challenge may not show its hand until early next year, and it will probably be dismissed and underestimated by the establishment powers. However, what is suggested is that history will look back on the events of December, 2006, and early 2007 and label this time as the beginning of the end of a establishment power. In 1342 it was the fate of Estonia who then endured over 700 years of Danish/German rule. In 1579 it was the end of self rule for Portugal. In 1769 it was a challenge to Britain’s claim to America. So in 2006, whose turn will it be?  We may not know the answer to this question for a few years but this, right now, is where it begins.

Ending Note: Such a Sulpa’e does not seem good for achieving great things in one’s life. I scanned over 3,000 charts of famous people to see who was born with a Sulpa’e amongst the stars of the Scorpion and found not a single famous chart. Look in your own files for a Jupiter in early degrees of Sagittarius while the Sun is in late degrees of Sagittarius and see what you find. It would seem that such a Sulpa’e in a natal chart is not about achievement on the world stage but it may be achievement on a more anonymous level. After all, we do not know the names of the first patriots in New York to say enough is enough to the British but we have certainly seen and felt the results of their actions! 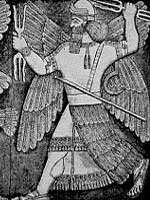 Nergal claims the empty sky: a return to the summer of 1800