Tutorials about the Sky and Astrology

Starlight’s aim is to help astrologers work with the night sky.

With this in mind, these tutorials are designed to take you from the simple principles of the celestial sphere and build your knowledge from one tutorial to the next. Eventually we, at Zyntara Publications, plan to cover more complex subjects such as star phases and other wonders contained in the starry sky.

The Chart and the Sky - The Celestial Sphere 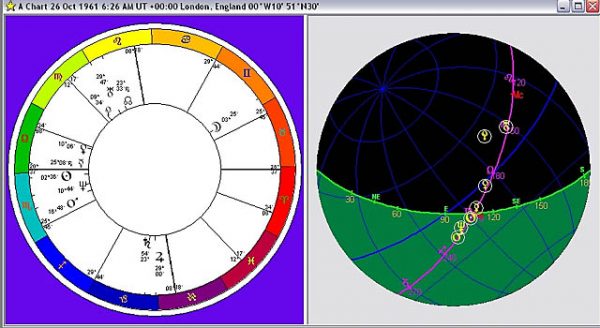 The Way the Sky Appears to Move: Diurnal Motion and Parans​

Due to the rotation of the earth on its axis, the stars and planets will appear to move in the sky – travelling from rising, to culminating, to setting, and then to rising again. This movement is called diurnal movement, and one complete circle gives us, of course, one day. Watch this animated celestial sphere, as it moves through a period of time. In this example, looking from London, the movement is from just before dawn on a day in Oct, 1961 to a time just before local noon on the same day. Note the North Pole (the place where all the blue lines intersect), and that it does not move. The North Pole will always be in this position for London, a position that reflects London’s latitude of 51° north. For the elevation of the pole above the horizon is always equal to the latitude of the location. If we moved our location to a place that was 20° North in latitude, then the pole, in this figure, would be closer to the horizon, (the green line) with an elevation of only 20° above the horizon. The poles, north and south, are important because they define the axis on which the celestial sphere, and therefore all the stars, rotate. You will also notice that some stars, which are close to the pole, are not going to dip below the horizon line during the course of diurnal motion (day’s movement). These stars are called Circumpolar, and will be visible every night for this location. In contrast to this, when observing the area of the South Pole (which, located opposite the north pole, is not visible in the figure ) you can see that stars in this area of the sphere will never rise above the horizon. These stars will never be visible from London. There are, however, other stars, such as Vega, Spica, Arcturus, and Antares, to name just a few, which do rise over the horizon and, at some stage of their diurnal movement later in the day, they will culminate, set, and also travel over the nadir. These stars will be visible from London at different times of the year. The Sun and the planets, however, present no such variation. Being on or close to the ecliptic, they will all, during the course of the diurnal movement (the course of the day), rise over the horizon, culminate on the MC (which is marked in RED), set, and later will also travel over the nadir. Planets that rise at the time as a star rises, so that both are on the line of the horizon at the same time, are considered to be connected. In this animation, Venus rises as Vega and Arcturus also rise, so Venus would be in paran with Vega and Arcturus. As you watch this animation, you will also notice some planets will culminate as some stars are rising. You can see, for example, that when Venus reaches the MC (marked in red on the ecliptic), Altair, the alpha star of the Eagle, rises. In summary a star is said to be in paran with a planet when a the planet is on any of the four points of rising, culminating, setting, or on the Nadir, and at the same moment in time, for that location, the star is also on ANY of the same four angles or points.

The Stars and the Celestial Sphere 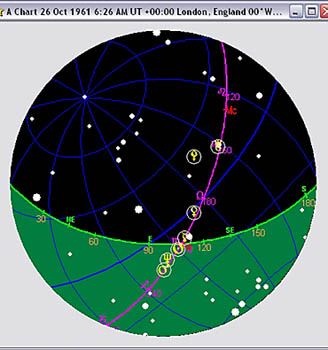 The stars are not tied to the ecliptic, as are the planets. And, as you can see on any starry night, the stars fill the whole sky from pole to pole. There are over 9,000 stars visible to the naked eye, just a few of which are shown in the figure. (Stars of a magnitude of less than 2.5) To help locate these stars, the celestial sphere has a grid system. Just as we have longitude and latitude on the earth to locate a city, we have a similar system in the sky to locate a star, or an object. The blue lines on this figure demonstrate the grid system used. The heavier blue line is the celestial equator, placed directly over the earth’s equator. Square to the equator are the poles. The North Pole is visible on this celestial sphere (it is the point where all the blue lines intersect), as the sphere is set for London, which is located at a northern latitude. You can also see the North Pole star Polaris, on the North Pole. The blue lines that run from the North Pole down to the South Pole (out of sight in the figure) are known as lines of Right Ascension, and are equivalent to lines of Longitude on the earth. The blue lines that are the smaller circles stepped towards the poles are known as Declination, and are equivalent to Latitude on the earth. Thus any star can be located on the sphere by measurements of Right Ascension and Declination, just as any city on the surface of the earth can be located by measurements of Longitude and Latitude. 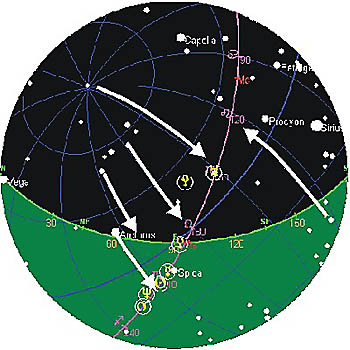 The ecliptic is the circle of the zodiac, and is shown in every chart as the outer zodiac ring, on to which the planets are placed. This works well as a method of representing the position of planets within the two dimensional limitation of a horoscope, because the Sun is always exactly on the ecliptic, and the planets are always close to the ecliptic. The stars, however, are not close to the ecliptic; they cover the celestial sphere from pole to pole. Nonetheless, the technique of star- aspecting chooses to sacrifice the stars’ true position in the sky by projecting all stars to the ecliptic. For example, Arcturus, which is located in the figure on the line of the horizon (near the number “60”), would be projected along the lines of Right Ascension (blue lines) until it cut the ecliptic. This projected position would be close to the Sun in early degrees of Scorpio. Thus an astrologer who worked with star aspects would say that Arcturus is at 3° or 4° Scorpio, and therefore conjunct the Sun. This is done to enable the star to be represented in the two-dimensional framework of a horoscope, in a similar manner to the planets. Unfortunately this technique sacrifices information about the true position of stars on the celestial sphere, and has consequently resulted in some misconceptions among astrologers. With astrologers no longer looking to the sky itself they came to think that Arcturus (or any other star) was actually on the ecliptic. One major problem with this misconception is that, if every star is projected onto the ecliptic, stars that are deep in the southern hemisphere will be placed on the ecliptic seemingly conjunct stars from the northern hemisphere – which have also been projected down from their northern location. Such alignments have led astrologers to lose all understanding of the true nature of the stars, and thus, correlatively, to lose touch with the host of meanings offered by the way that stars move, and the myths they have, over millennia, accrued. There is, however, an answer to this dilemma. We do not need to displace the stars to conform to the two dimensions of a horoscope, for there exists a far older way of linking stars to planets. This method acknowledges the true position of a star and is called parans. To demonstrate, if you once again look at Arcturus, you will see that it is on the line of the horizon, rising. Further around, still on the line of the horizon, is another star, Vega. You will also notice that Venus is on the horizon, about to rise. So, for this date and for this place, Arcturus, Vega and Venus all rise together. This means that, within this older, more visually correct, system of stars, the mythology and meaning of Vega and Arcturus will be blended with the meaning of Venus. It should be noted that Parans are very location specific. If we move the location of observation from London to some other city, then we will alter the tilt of the horizon line shown on the sphere. This means that Venus may only have this particular relationship to these two stars for this location. Working with Parans is the process of looking for such alignments between stars and planets. Before the modern era, this was very difficult to do retrospectively, but now that the computer is part of the astrologer’s toolkit, this elegant ancient method is available to any astrologer with a hard drive.
This website uses cookies to improve your experience. We'll assume you're ok with this, but you can opt-out if you wish. Cookie settingsACCEPT
Privacy & Cookies Policy