But in fixed stars terms, the Royal Stars of Persia refer to four particular stars – Antares, Aldebaran, Regulus and Fomalhaut – each one embedded with Persian mythology and each one promising glory, achievement and success. All four Royal Stars are connected with the supreme Persian deity Ahura Mazda, father of Spenta Mainyu, beneficent spirit, and Angra Mainyu, the destructor. Thus to have your chart connected in some way with a Royal Star means that there will always be this duality between light and destruction interwoven into your earthly journey. Great glory is promised to you but only if you can overcome the nemesis which can destroy. In this issue of the V.A.N. I am focusing on the Royal Star of Antares.

Antares is known as the Heart of the Scorpion and is the alpha star of the constellation Scorpius. Linked with obsession, it is a star that brings intensity and probing. I used Starlight to scan my files for charts that contained Antares as the heliacal rising star (see August, 2005 issue of this newsletter for more information concerning the heliacal rising star) and found a raft of names, some of which were:

The heliacal rising star is the star that has been walking the path of the underworld and has now emerged to be visible in the world of humans, bearing gifts from the land of the person’s past, their family or their genetics. This a gift or treasure is handed to the person at birth. The heliacal rising star is a theme in the person’s life. It helps build the person’s philosophies and can, at times, take on a vocational pulse. To the Persians, Antares, the Watcher of the West, was the god of the dead, Yima, impelling a person to generate success by encountering a cleansing life-and death experience. To have Antares as one’s heliacal rising star indicates that you are so strongly focused that you can not only be obsessive but also potentially abrasive and ruthless in the pursuit of your goal [1].

Antares in paran with a planet

I also used Starlight to search for people who had Antares in paran with a planet or luminary and found the following people:

Antares with the Sun:
“Someone who is intense and focused, the potential to be obsessed”.

Antares with the Moon:
“Emotional turmoil, willing to face drama.”

Antares with Mercury:
“Mental obsession with a subject or a person.”

Antares with Venus:
“Breaking down social or emotional barriers.”

Antares with Mars:
“To act, fuelled by inspiration or obsession.”

Antares with Jupiter:
“The engineer, a person who can envisage a structure, material or social.”

Antares with Saturn:
“Black versus white, a life full of the struggle with polarities.”

One would have to look at each person’s chart in order to understand the nature of the theme being expressed by that planet / luminary and hence the way that intensity and obsession underwrote that theme. But this general look at Antares, either as the heliacal rising star or in connection with a planet / luminary in the charts of the well-known, gives us an indication of the nature of Antares, the Royal Star, the Watcher of the West, that promises glory through a clear-eyed focus. All of the people above have been able to generate that focus into their work, either taking on the roles of obsessive characters as actors or writers or by looking at what lay beneath the surface of life as inventors, researchers and political activists. Others, such as Joan of Arc and Charles I, paid the price for obsession with their own lives, leaving us the legacy of their preoccupation.

All of the Royal Stars concretize the duality between Spenta Mainyu and Angra Mainyu. In the case of Antares, fulfilment of the promise of glory takes a person through an encounter with passion, mania and compulsion and the shadow side embodied by Angra Mainyu, the destructor, takes the form of intensity and obsession. With other Royal Stars the form is different and we will meet these in future editions of the V.A.N.

If you have Antares in paran with a planet in your chart it can give you glory, the glory metaphorically symbolized by rooms lined with porphyry, necklaces of lapis lazuli, bracelets of carnelian and rings of turquoise, a market place of magic carpets, tapestries and silks and the magnificent decorative reliefs, glinting mosaics and the rich gold work of ancient Persian architecture. But beware. Tread lightly and with clear eyes for your nemesis is destructive obsession.

Note: All the meanings of star and planet parans quoted are taken from Starlight Software. © Barnswood Ltd and Bernadette Brady. 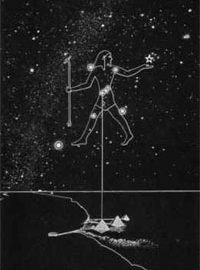 Star Phases, The Helical Setting Star and Curtailed passage – The Ascent and Descent of the Soul.