The lunar eclipse on 17th October, 2005, provides a rich opportunity for the exploration of visual astrology.  Lunar eclipses were key events in the Mesopotamian view of the world as the Moon, Sin, was the god that empowered the king. Normally any obstruction to the light of the full moon, even if it was simply a passing cloud, was an omen of the king being challenged in the coming month. Thus the event of a lunar eclipse was a serious threat to the kingdom or to the kingdom’s enemies.

As to whether it was the kingdom or its enemies which experienced the ill-fortune depended on the location in the sky where the eclipse was actually observed. To the Mesopotamian priest, if the eclipse was seen in the east – Moon rise – then the ill fortune indicated by the eclipse would occur in the land of one’s enemies. This also indicated that illness would be cured and generally threats would be reduced. However, if the eclipse occurred in the west – Moon set – then the ill fortune would affect their country or their king (Hunger 4).

The above diagram (Figure 2) is for the visibility of the forthcoming lunar eclipse on 17 October, 2005. For the USA, the eclipse is seen in the west as it sets (grey shaded area on the left). Thus this would be delineated as difficulties for the “kingdom” of the USA. Interestingly if the astrologer was in the Middle East, they would see the eclipse occurring at moon rise in the east (grey shaded area on the right) and would therefore delineate the ill-fortune for their enemies. As can be seen from Figure 2, this particular lunar eclipse is actually linking up the USA and the Middle East via its lines of setting and rising.

Now if we are observing the eclipse in the USA, then this is a moon which sets with “unwashed feet” (Hunger 4) which is the term used for the observation of a partial lunar eclipse in which the lower part of the moon’s sphere is darkened and the eclipse occurs as the moon is setting. This is shown in Figure 1.  Such a moon with “unwashed feet” indicates that there will be attacks but the clay tablets are broken and the actual nature of the so called attacks are lost.

Additionally, the ill-fortune could be moderated or emphasized, depending on whether other planets were visible at the time of the eclipse. For example, if Jupiter or Venus were visible, then their positive forces could reduce the potency of the eclipse (Hunger 300, Parpola 40).

Yet this is not the case with this forthcoming eclipse. As can be seen from the chart of this lunar eclipse, at the time of moon set there are only two planets which are visible in the sky (above the Ascendant/Descendant axis): one is Mars, bright and just above the setting Moon in the 8th house; and the other is Saturn in the 10th house. If you look at Figure 1 you can see the sky map for this chart. As the moon sets, Mars gleams bright red above it and above Mars is the red star of Aldebaran.

The only restraining force is Saturn who, in visual astrology, represents the King.

The English Civil War – the last time such a sky visual occurred.

In scanning over 500 years of sky narratives there seems to be only one available example of the same sky narrative that was an eclipse setting with “unwashed feet” with both Mars and Aldebaran shining above it and no Jupiter in the sky.

This was on 8 October, 1642.  This lunar eclipse set over England, so its ill-fortune was focused into England and Europe. As can be seen in this chart (left), the moon sets as it is being eclipsed and only Mars is visible in the sky. This lunar eclipse occurred just before the first battle of the English Civil War – the battle of Edgeville which took place on 23 October, 1642. Charles I marched towards London and met the parliamentary forces at Edgeville. This first battle was undecided in its outcome. However, by 12 November at the battle of Tuirnham Green,  Charles I had been repelled from his drive towards London. From that period onward he used Oxford as his base throughout the civil war.

From this eclipse England was thrown into a civil war that eventually lead to the success of the parliament and the execution of the king.

To add to this sky narrative for this current month, Venus which at the moment is a bright evening star has moved close to Antares the Heart of the Scorpion. This combination is seen as Antares receiving radiance from Venus and in this manner the star Antares is being empowered by the brilliance of Venus (see figure below).

Independent of all of this potency of the visual astrology, we can also note that George W. Bush’s MC/IC axis is receiving this lunar eclipse and that this particular lunar eclipse belongs to a series which started on 11 July, 1843 and is concerned with the illusions of power or resources coming to a sudden end through difficult revelations.

So the potency of the sky narrative is reflected in the horoscopic use of eclipses.

Now the advice which would be given by the Mesopotamian visual astrologers would be to use a substitute king. Thus any ill-fortune would befall the substitute and not the true king (Parpola, 298).

But to be honest, I do not know how to delineate this complex sky narrative. Whatever occurs, the simple matter is that in visual astrology a moon with “unwashed feet” is setting over the USA while only Mars and a radiated Antares oversee it. So the central issue for visual astrologers is to wait, observe and learn, not only for immediate events in this next month but also for events over the next six months until another lunar eclipse is observed in the sky. Although we can locate the difficulties of the eclipse being focused in the USA, the key questions which are raised are these:

This last is certainly not a question that as astrologers we have asked before! 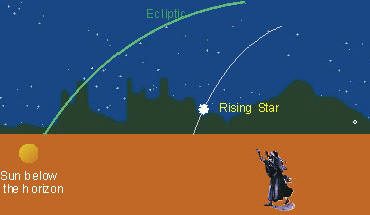 The Stars, the Horizon and the Sun – the unique relationship that stars have to place

The Prince takes the Crown: The 1000 year cycle of Saturn, Jupiter and the Full Moon