We tend to paraphase this to simply as above so below and it is one of the great principles of our subject, but few astrologers pause to think just how literal this statement really is.

As we look up we see the sky above but since the 1960s we have also had the ability to change our perspective and look at the earth from the sky. As we look up at the sky during the day it is full of colours, clouds, sunsets, sunrises and the like. Similarly, if we look down at the rotating earth then as the sun illuminates its surface we also see a parade of colours, oceans, land masses and clouds. But at night both change, the sky to a dome of twinkling lights, the earth also to a ball of twinkling lights. The earth, since the advent of lighting, has slowly been mirroring the starry sky and at night we collectively reflect back to the sky the same sort of images and patterns that the sky has been showing us for thousands of years. We become a ball of twinkling lights to the sky’s dome of light.

Within the sky the “first world” or the well-lit region of the globe is the Milky Way which cuts a line of bright stars across the equator (blue line in above figure). It is in the Milky Way that most of the “big cities” are located. The great metropolis of the sky is Sirius the brightest and biggest star in our night sky. Clustered around it and spreading out in an arch, like the great cities of North America or the populated regions of Europe, are many other bright stars, Aldebaran, Betelgeuse, Castor and Pollux, Capella to name just a few. Outriders or the “frontier new world cities” are the big stars in other places of this starry globe, stars like Canopus, Achernar and Fomalhaut in the Southern hemisphere.

But if we now turn around and look at the earth at night (image above) we see the great cities of the earth also forming a band around the globe, but now the band is running north above the equator and sweeping through Europe and North America, with outriders from the new world twinkling their lights in Sydney, Cape Town, and areas of Argentina, among others.

We are, as we populate the planet and turn on our lights at night, effectively mirroring the night sky; we are reflecting the image of the stars back to the stars. As above so below…

Now given that this probably has no personal astrological meaning for your chart, it is nevertheless an example of the connectedness of all things: how the patterns in one sphere, the sky, are reflected by the patterns being formed in another, the surface of the earth as we populate the planet. Humanity is, aware of it or not, in a relationship with the stars.

Cities in the Sky – Declination

Just as a great city like New York has a location on the earth defined by its longitude and its latitude, so also do the stars in their spheres. A star’s location in the celestial sphere is defined by its declination – which is the same as the latitude of our earth-bound cities, and right ascension (measured in time), similar to terrestrial longitude. Thus for a star such as Eltanin, a bright red star in the head of Draco, the dragon, its declination (latitude) is the same as for London – 51N29, which means that the head of Draco will pass directly over the city of London. In fact, any city or place at the latitude of 51north is “under” the head of Draco. It is interesting to speculate that this bright twinkling red star which shines so brightly over the United Kingdom could offer us insights into the red dragon used as a symbol of Wales.

Similarly the bright star Algol in Perseus the Warrior is located at a declination of 40N59, which means that it highlights a band of latitude which embraces New York City and the northern parts of North America. Whereas down south the stars in the sting of the Scorpion sweep over cities such as Sydney, Melbourne, Adelaide, Perth and Cape Town, to name a few; indeed the Scorpio constellation as a whole virtually claims the southern continents of Australia and Africa as its own.

Sometimes countries reflect this special relationship to the heavens by encompassing key constellations into their flags. Both Australia and New Zealand have built their flags around the image of the Southern Cross, a constellation that is visible every night of the sky from those places, while the state of Alaska adopted the constellation of Ursa Minor (the little bear that contains the North Pole Star) as its state emblem in 1959. Brazil on the other hand places the whole starry sky in the centre of its flag, showing its country’s relationship to the equator in the sky. Indeed, of the 246 flags of countries 89 of them incorporate sky elements into their design, which means just over 36% of the world’s national flags are linked to the sky. Here is a sample of a few such flags:

Stars and Moon rising or culminating, representing states or ideological themes; stars, crescents and constellations are major features of the world’s flags.

Now astronomers tell us that we are made of star-stuff, that the physical elements of our world and thus our bodies have come from the stars, millions of them acting like millions of creators, generating the elements of our universe. But we are more than just physically of the stuff of stars, for as we see just from the world’s flags, their images are deeply embedded in our global library of symbols. And furthermore, with the advent of modern lighting it would seem that by happenstance we are also drawing “constellations” with our cities.

As above so below…. the stuff of stars. 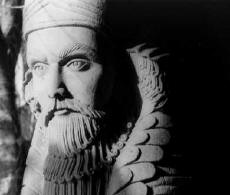 The Royal Stars of Persia – A focus on Aldebaran

Algol – The bright star in the head of the Gorgon